Stories from the tour

Sofia and Bulgaria, seen through the eyes of Free Sofia Tour guests. Interesting stories from the tour.

We are the best thing to do in Sofia. This is beyond dispute, just see the reviews. How is that possible? Take an amazing team and add hard work to taste. Here’s some more about the ingredients of the Free Sofia Tour recipe for success. In order to provide these 2 hours of incredible experience, there’s a lot going on behind the scenes. We try to make you a part of that by telling you about our training process. Remember how 43 people applied to become part of the team back in February? And how only 13 of them got to the last stage? Well, 9 of them are already walking the streets of Sofia with the Free Sofia Tour sign. We asked them to tell us what they thought of the selection process and here’s what the first one of them said: Desi: Guys, I made it to the final. The end of the beginning finally came. It lasted almost one semester, it included a presentation, a text book […]
Do you like it?0
0 Read more
Categories

Walking as a way of living

For one year and a half we walked 2810 km during the 878 tours that we’ve done shuffling around the Sofia city centre. Some would say we’ve made it far. Some would say we’re moving in circles. They would all be right. But one day on the tour we had a girl that would consider it quite unsatisfying. This lovely French girl put herself into the great challenge to walk around the world in 10 years. She’s planning to pass a total of 70 000km only on foot. Caroline Moireaux is a quality engineer from a small French town. She got caught up with the idea of going around the world when she found on Internet that 2 guys did Asia for one year walking. Then the preparation started – one year of coming up with the route, arranging visas, finding the necessary equipment, that had to be cheap, strong and light, and telling friends and family. The world tour started with six more people at the beginning but they […]
Do you like it?0
0 Read more
Categories

Ever since the beginning of the Free Sofia Tour we have been looking for an option to put a sign at our starting point. This turned out to be an expensive and complicated endeavour. That’s why one of our team members came up with an original idea to mark the beginning of the Free Sofia Tour… A branded bike at the bike stand near the Palace of Justice. So we set off to find a cheap bike. And proved again that everything could be found at Ladies Market in Sofia. It took us 70BGN to buy the bike and 30 more to take it apart in order to paint it and then put it back together. Guess for a price like that we couldn’t have asked for better invoicing… Then the pieces were brought to a friend of ours who managed to paint the whole bike in the colours of the Free Sofia Tour: Next step was to actually brand the bike. This happened with the help of our friends […]
Do you like it?0
0 Read more 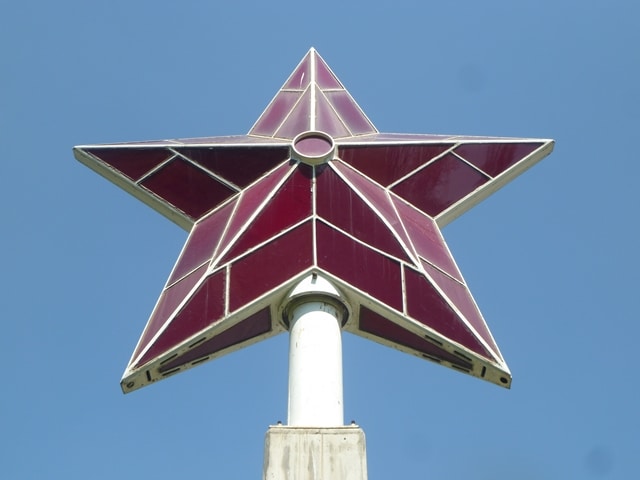 Sofia’s Christmas Decoration – The red star 2.0 The person who chose Sofia’s Christmas decoration either didn’t think much or had a very weird sense of humour. I realized that a couple of weeks ago after telling the story of a monument that used to be part of our tour for around 8 months. I am talking about a particular series of ornaments that could be seen around the former center of the Communist power in Sofia. The red star 2.0.   The red star is no longer there If you don’t know what I mean, check our article ‘The red star is gone‘ 🙂 Or take a very careful look to the top of the building in the middle on the next photo. Nowadays the administartion of the Parliament uses the former Communist Party headquarters. The red star has been replaced by the national flag. Lenin is also gone. Both the star and the statue could be seen in the newly-opened Museum of Socialist Art. The new Christmas stars are […]
Do you like it?0
0 Read more
Categories

Jumping off a bridge

When a guest asks you if the highest bridge in Bulgaria is close to Sofia, you don’t expect them to wanna jump from it. First thought that crossed my mind was sightseeing places like Lion’s bridge or Eagle’s bridge… But that was not the question. The question was – which bridge is deeper so that I can jump from it? No worries. Anna from Russia didn’t have any suicidal tendencies. She was just brave enough to wanna jump from the Vitinya bridge. 120 metres deep. Not even a river below 🙂 Fortunately, she used bungee. Of course, we helped her arrange that and she was nice enough to send us a video from this adventure. Let me thank you for your help with it! That was wonderful! Her words. Indeed, bungee jumping is quite fun. It’s just one of the many incredible things to do in Sofia or very close to the city. I was brave enough to jump from just 60 metres near Karlovo. It wasn’t hard. But now […]
Do you like it?0
0 Read more
Categories

Close encounters of the third kind

We’ve already had more than 7000 guests from more than 95 countries from 6 continents. But not all of them have been entirely… human. Don’t worry, we haven’t had any close encounters of the third kind, yet. Just like we haven’t had any penguins yet at the tour yet. Meet my friends Percy the Peanut and Erwin: Percy was among the last ‘people’ to see the red star that used to be on top of the former Communist headquarters as part of our tour. As we told you in a previous post, it’s gone. The good news is that you can see it in a museum now. Erwin wanted to take a photo in front of one of the most beautiful buildings on our tour and in the city in general – the Russian Church. It’s also a place where you can make all of your wishes come true. But more about that – if you join our tour. Now the funny thing is that Percy has a really good […]
Do you like it?0
0 Read more
Categories

Another high-profile visit. Matt Mullenweg, the guy who created WordPress, joined the evening tour 🙂 Thanks for the great platform – we use it in our blog!
Do you like it?0
0 Read more
Categories

Free Sofia Tour welcomed part of the 3000+ English soccer fans that were expected to arrive in Bulgaria’s capital to see the game between the two countries’ teams tonight. Our walking tour was recommended by the British Embassy here in Sofia and included in the FSF’s England fanzine, Free Lions, produced and distributed at England away games. We are also part of leaflet for the game of the the official supporters club (Englandfans). In order to give our guests a better welcome, we provided flyers for the Fans’ Embassy and additional volunteers were waiting for them at our usual spot. As you know, we like to keep the groups smaller. That’s why yesterday (01.09) at 6PM there were 4 people with Free Sofia Tour badges at the start. This morning at 11AM, there were again 4 volunteers that split our 80+ guests into four separate groups. Until the end of the weekend, there would be at least two people expecting more guests from England and not only. Our “regular” group this […]
Do you like it?0
0 Read more
Categories

Sofia is so much better!

Among my group that day in mid April I had two lively girls from Austria doing a Balkan trip. They came from Serbia and after Sofia they were planning to go through Istanbul to Kapadokia, where apart from historical adventure they wanted to do ballooning! Their final destination was Athens and the Greek islands. Nothing could escape from those two girls’ notice – they just saw everything, asked about everything and commented on everything – from cultural to religious to political matters. From the very first minute. Someone had recently died in a car crash close to our first crossing on the way to the church Sveta Nedelya. So – as the tradition in Bulgaria demands – there was an obituary on one of the trees (a memorial with a picture of the person who has passed away) with some flowers. “Welcome to Sofia” – one of the girls said, after I explained what’s this all about. Still, both girls admitted that people actually drive more carefully in Sofia than […]
Do you like it?0
0 Read more
Prev page
12345
Next page