Sofia is so much better!

Among my group that day in mid April I had two lively girls from Austria doing a Balkan trip. They came from Serbia and after Sofia they were planning to go through Istanbul to Kapadokia, where apart from historical adventure they wanted to do ballooning! Their final destination was Athens and the Greek islands.

Nothing could escape from those two girls’ notice – they just saw everything, asked about everything and commented on everything – from cultural to religious to political matters.

From the very first minute. Someone had recently died in a car crash close to our first crossing on the way to the church Sveta Nedelya. So – as the tradition in Bulgaria demands – there was an obituary on one of the trees (a memorial with a picture of the person who has passed away) with some flowers. “Welcome to Sofia” – one of the girls said, after I explained what’s this all about. Still, both girls admitted that people actually drive more carefully in Sofia than in other Balkan cities they’d visited so far. 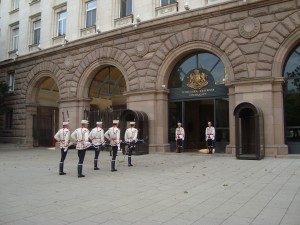 In front of the Presidency, after we’ve observed the change of the guards, I was talking about the President and his role in the country, and I received an unusual question:

“Is he a puppet of the Russian Mafia? We heard that actually the Mafia is ruling the country.”

I don’t know who is spreading those rumors in Austria, but I tried to clear up those suspicions 😉

In front of the Cathedral I again received a rare question:

“What is this back part of your churches behind a wall of icons? What is it used for?”

She was asking about the altar. The altar is the most important part in all religious temples and it is one of the three main parts in the Orthodox Churches. Here the altar is situated in the Eastern – or the back – part of the church. In the

Orthodox Churches the altar is separated from the main corpus of the church by the so called iconostasis – a marble or wooden decorative wall covered with icons of various saints in a strict order. In this way the altar remains “hidden”, since it is the most sacral place of the temple and only the priest and his assistants have the right to enter.

Since the two girls were in Belgrade before coming here, they were all the time comparing and discussing. I’ve personally never been to Belgrade, so I couldn’t participate in their discussion. Besides, I know that if you take a tour, you learn more and feel much more excited about the place – and they didn’t take the free tour in Belgrade. But still, I cannot skip the final comment of one of the girls, which once again made me so proud: “There’s nothing to take pictures of in Belgrade – apart from bars and night life. Sofia is so much better.”