Coat of Arms of Sofia

When was the last time you got out of your comfort zone?

Ages ago? Don’t worry, it is pretty much the same for me. But thanks to 11 Dutch guys, 365 Association and a pair of kangoo jumps shoes, on the 21st of November not only did I make a breakthrough but I set off towards the stars… almost literally.  The Private Kangoo Jump Tour!

Well, accidentally of course. But we all know what they say, the best things happen to you when you least expect them.

What happened during the first Private Kangoo Jump Tour?

So when our Private Tours coordinator Dessi told me that I had to make a tour with a pair of kangoo jumps shoes, I told her: “You gotta be kidding me!” After a couple of images on Google and some videos on youtube, I was totally hopeless for the initiative and headed towards the meeting point with the absolute certainty that I would either fall down and break something, or collapse on the ground exhausted. On top of it not only had I never put such shoes on and am totally out of shape, but also was supposed to do a tour with 11 Dutch guys, who had come here for a bachelor party. If that’s not a leap into the unknown, I don’t know what is.

A group of 9 young men with huge smiles and a little blurred vision welcomed me.

I figured out quickly that the ranks had thinned up. However, it was a Friday the previous night and the guys were here for a bachelor party so how could anyone be mad with them. We had a little chat and I realized that they were also totally clueless about the tour but wanted to have fun.

Well, let’s get this party started than!

We moved the old fashioned way, i.e. on foot towards the square of Holy Sunday church. There, already waiting for us with the shoes, was Rosi – one of the most positive people I have ever met. I am sure that this is partially due to the fact that she’s a kangoo jumps coach. After she gave us brief instructions, a few minutes later we were all suited up with the special shoes and the Private Kangoo Jump Tour began.

The moment we cast a glance at each other, we burst into laughter. We looked funny and unusual.

And that was how we were feeling as well. We immediately felt jumping sky high and running at full speed.

This is what we tried to do, of course. From one stop to the other, down the steps, through the subways, crossing the streets and the alleys, we were sightseeing while working out and having fun at the same time. The feeling was liberating, we were children again, at least for 2 hours. We were all Peter Pans and we were flying around the city, equipped only with pure enthusiasm and smiles. We sang and we danced traditional Bulgarian dances, we even found the time to pass by the Christmas market at the City Garden.

Rosi was always with us and from time to time she was trying to make us do some special exercises such as squats or scissors jumps. We attracted everyone’s attention but the most important of all was that we had a great time.

According to our new Dutch friends the experience was way better than they had expected. 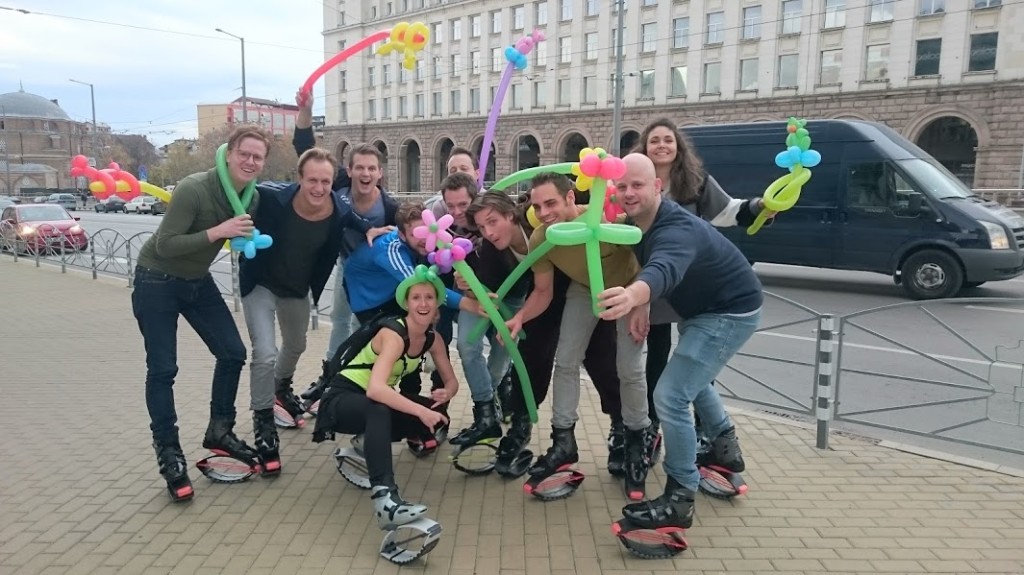 And our time together simply flew.

Big thank you to all who took part and contributed to this lovely Private Kangoo Jump Tour experience as this officially goes to my top 3 most impressive tours I have ever had for the past four years.

Words are useless, the photos will help you a bit more but truth is the best you could do is not to be afraid to step out of your comfort zone at the first chance. I promise you would not regret it!