Lucky number 13 will take care of your good time!

Walking as a way of living

But one day on the tour we had a girl that would consider it quite unsatisfying. This lovely French girl put herself into the great challenge to walk around the world in 10 years. She’s planning to pass a total of 70 000km only on foot.

Caroline Moireaux is a quality engineer from a small French town. She got caught up with the idea of going around the world when she found on Internet that 2 guys did Asia for one year walking.

Then the preparation started – one year of coming up with the route, arranging visas, finding the necessary equipment, that had to be cheap, strong and light, and telling friends and family.

The world tour started with six more people at the beginning but they all left at one point. This didn’t stop Caroline at all. She keeps meeting new people on the way and continues to follow her plans. Now she’s travelling with a French guy that she met on the way – Cedrick that has several walking projects in his past and is on his way to walk to Mongolia now. 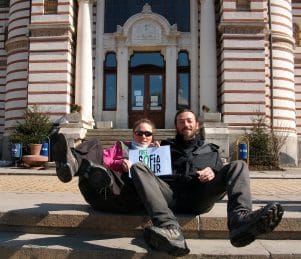 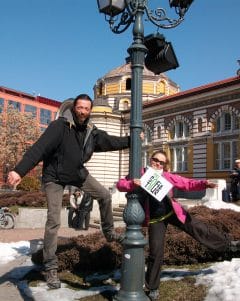 Walking covers the distance of around 25 km per day with a bag that weighs 20 kl and they say that it gives you the sense of freedom.

The estimated budget of Caroline is 4 Eur per day that goes mostly for food. Sleeping is arranged in Couch Surfers, Mountain Hunts or guest houses, or out in the open air. The way runs through mountains and secondary roads. Caroline tries to see everything on the way, to get to know some people and learn a little bit of the language. That makes the whole experience not a mere travelling around the world, but also getting to know the culture of all places.