Beginning of April I had a group of two ladies from Venezuela. The younger one lived in Sofia for almost two years, working as a Spanish teacher of very young children. She and her husband have visited many places across Bulgaria, but somehow she felt she didn’t know enough about the capital and its history. Her mum was visiting them, so they joined the tour together.

The tour started with a passionate discussion about Geo Milev.

It turned out that the younger lady knew his daughter – the children’s writer Leda Mileva. Geo Milev was a Bulgarian writer and poet, the main representative of exp

ressionism in Bulgarian literature. His most famous poem “September”, published a year before the Sveta Nedelya Church assault (visit our tour to learn more), was one of the reasons for his murder in the reprisals after the terrorist act. At that time he just disappeared and the truth about his brutal death was only found out 30 years later.

So, Communism became the main topic of discussion during the whole tour. After they saw the former Royal Palace and heard the story about the Mausoleum of Georgi Dimitrov, the mother exclaimed:

Her daughter, on the other hand, was far more concerned about the present than the past.

“The Communist regime must have been very bad for you” – she started. “But I’m tired of hearing the Bulgarians complaining how bad is everything in their country.” 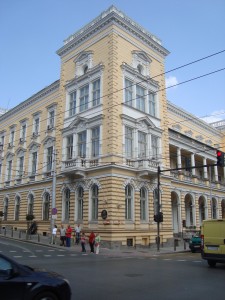 t of our guests like the center of Sofia, but it’s always good to hear that from someone, who has lived in Sofia for a while. Then you’re sure that their opinion is more objective. Near the Central Military Club, the daughter exclaimed:

“I like this part of the city – everything you need is here. And it’s very European.”

At the very end of the tour I learned that the ladies are from the Venezuelan island Margarita and that the mother actually started doing similar tours for foreign visitors of the island many years ago. Today she has a successful travel agency and other companies in tourism. And here is her last advice – not only for our team, but for everybody with some enthusiasm and bright ideas:

“You have such an interesting combination of history, that it is a pity that you don’t realize it. But your tour has started in the right way – you’re telling everybody about your country and culture, this is how a country should start developing itself.”