Back in March I had a very friendly couple from Hong Kong, visiting only Bulgaria and Romania. Went to Veliko Tarnovo before they came to Sofia and on the next day they wanted to do another short trip to somewhere in Bulgaria, maybe Rila monastery or Plovdiv. Initially, they wanted to go to the Rose valley (not so many people know in advance about Bulgaria being the world number one in rose oil production), but they were disappointed to find out that March was not the right season to visit it.

Somehow they reminded me of my stay in Southeast Asia 2 years ago 🙂 When I asked about their hobbies, they answered “going to the cinema, playing badminton and… KARAOKE”. Many families in Asia have their own karaoke device where you can find many of the popular songs and the family often get together and make a karaoke session. 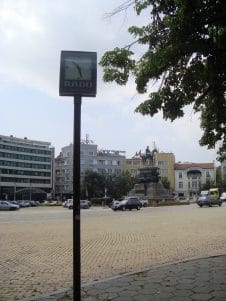 I learnt to love food in Asia – where food is an important part of the everyday life and culture. For just one day in Bulgaria they have noticed that we eat a lot of meat. So they were surprised when I told them that the weeks before Easter we actually have Lent and the religious Bulgarians do not eat meat or dairy products.

One other curious thing which they noticed were the clocks in Sofia – not the style of the clocks, however, but the fact, that all of them were showing different time 🙂

And – finally I got THIS question! In Veliko Turnovo they have seen a lot of obituaries and they wanted to know what were they.

They thought those were pictures of people, who were missing! In Asia I have see 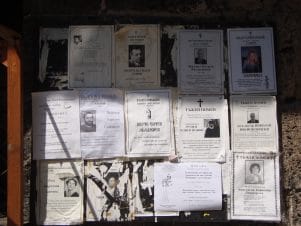 n similar things for criminals prosecuted by the police. If you are Bulgarian, try to imagine how spooky this custom actually is… Pictures of dead people follow us wherever we go – on the streets, on the front doors of our flats and houses, on a tree where a car crashed deadly… Isn’t that creepy? For us it isn’t – we’re used to it. But for many visitors it’s weird and even terrifying.

For their short stay in Bulgaria, my guests haven’t only noticed a lot of curious details, but they have also learned some basic Bulgarian. When I offered to take a picture of them, they said „благодаря” – with almost no accent! And at the end of the tour I was happy to hear „довиждане”. In return, all I can say is 謝謝 – for visiting the Free Sofia Tour!