Close to our city of Sofia, there is a curious destination that is not very well-known with tourists. It is renowned as Sofia’s Mount Athos, or “Sofiiska Sveta Gora.” The term refers to a group of monasteries around Sofia that was established in the Bulgarian Middle Ages (1185-1417) and constituted a spiritual community under a common management. The monasteries were founded at the feet of several mountains: Vitosha, Lyulin, Rui  Plana, Lozen , and the southern slopes of Stara Planina (which you may know as the Balkan Mountain). Over time, the monasteries formed a ring around the city (you can find a map of the area here). Originally there were 14 of them, but later on another 7 convents were added to the cluster.

In the Stara Planina (Balkan) mountain, only 22 km away from downtown Sofia, you can find one of these monasteries – the Kremikovski Monastery. It was established during the reign of Bulgarian king Ivan-Alexander (1331 – 1371). During the Ottoman siege of Sofia in 1382, the monastery was demolished. It was only rebuilt 111 later, in the same place. The monastery, like many others in the country, was known as a literary center. The buildings are a monument of culture with national importance. 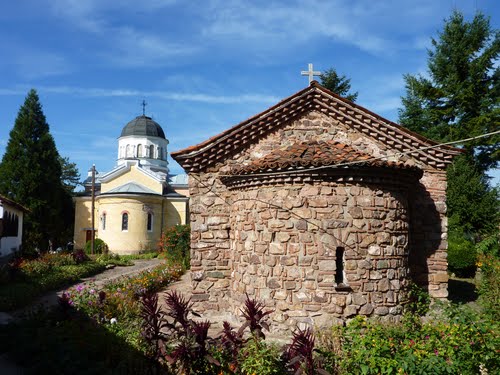 The old church and the new chapel
Source: www.panoramio.com

Nowadays, you might be surprised to see that there are two churches in the yard of the monastery.

The old church dates from the reestablishment of the monastery in the XV century, whereas the new one was built the XX century. Inside the old church (St. George) you can see some of the preserved original frescoes. The monastery is still a functioning one and you can feel the spirituality of its inhabitants. The monks keep chickens… and peacocks! They also sell Bulgarian yogurt and home-made honey. There is also a workshop for icons, where you can witness the making of Bulgarian icons (a ritual in and of itself – be sure to ask your guide!). Since the monastery is situated on a hill, it commands a great view of Sofia and the surrounding mountains. We’ll let the pictures do the talking: 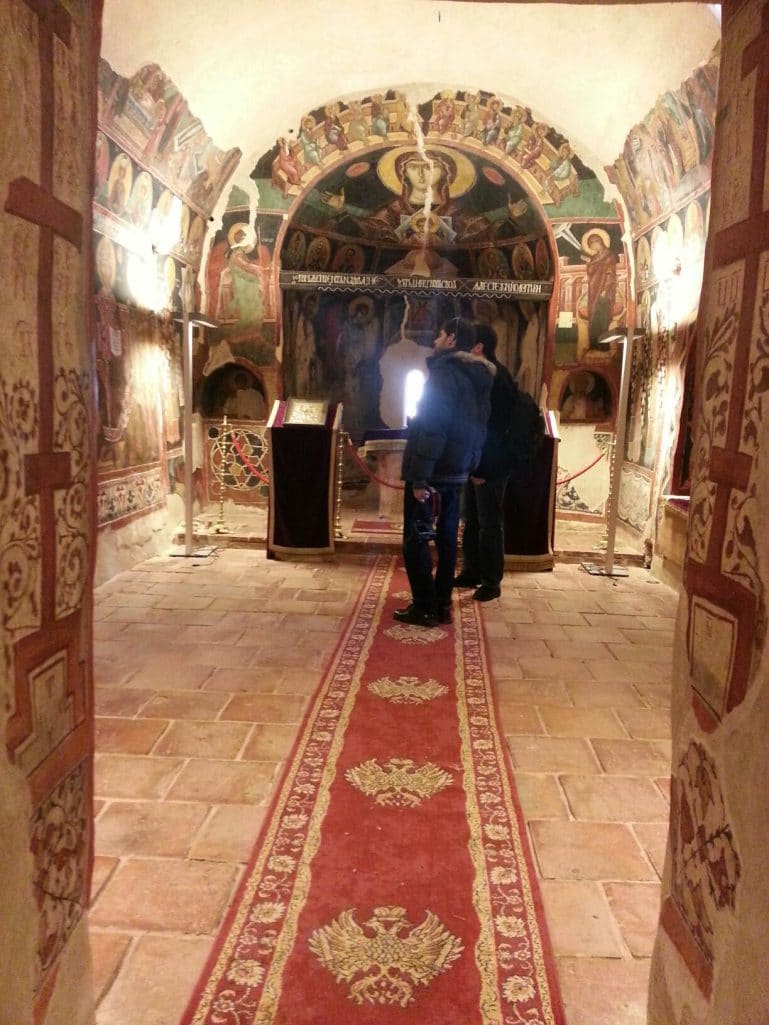 The frescoes in the old church

How to get to the Kremikovski monastery

Are you excited to visit the monastery? Well, here is how to do it:

Going to the monastery by car is the fastest and most convenient way. It should not take you more than 30 minutes. Exit Sofia from Botevgradsko shose and then follow the instructions here. There is only one confusing part: your left turn to the monastery. There are no signs, so use this picture as your cheat sheet: the turn should look like this.

Getting a taxi to the monastery should not cost you more than 20 leva (10 euro). The tricky part here would be getting back, because you can not hail a taxi here. Instead, you can call one.

Sofia has minibuses that go from the city to nearby villages. The one that will take you the the neighbourhood of Kremikovci is number 34. It operates every day from 6 am to 9 pm and it is as frequent as 12 minutes. From downtown, you can catch it all along “Maria Luisa” Blvd. or from parts of “Knyaz Al. Dondokov” Blvd. (shown on the map). Make sure you catch it in the right direction — it should be headed for Kremikovci. To stop the minibus, just waive your hand when you see the van. It will cost you 1,50 leva in each direction. You’ll have to step off at the neighbourhood of Kremikovci and then walk for 2.5 kilometers, or about 25 minutes.

Any questions? Ask us in the comments or send us an email!