What is Unification Day?

Bulgaria celebrates Unification Day on September 6th. This is the anniversary of the unification of the Principality of Bulgaria and the autonomous Ottoman province of Eastern Rumelia, which took place on September 6th, 1885. 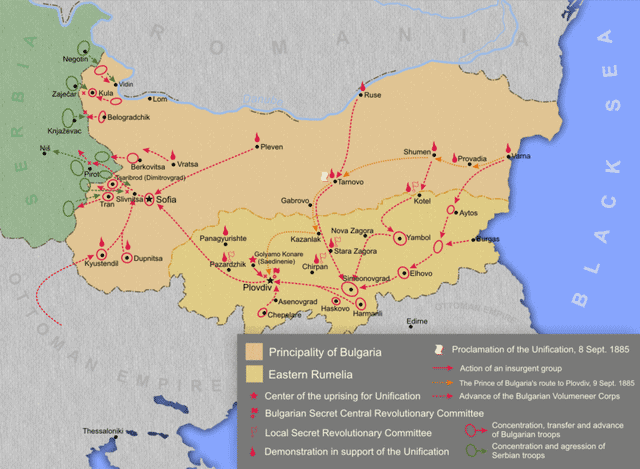 Why did Bulgaria need to unify?

At the end of the 14th century, Bulgaria became a part of the Ottoman Empire through conquest. While there were quite a lot of uprisings, an organized liberation movement really emerged in the 19th century, influenced by the ideas of the Enlightenment, humanism and nationalism. The activities of this movement culminated in a massive revolt in April 1876. The Ottoman authorities successfully put down the rebellion. However, media reports about the accompanying atrocities caused an outrage in societies across Europe and North America. This led to a war between Russia and the Ottoman Empire. The war ended on March 3rd, 1878, which Bulgarians celebrate as their Liberation Day.

In those days, however, nothing in Europe happened without the consent of the Great Powers. They held a congress in Berlin, which determined the boundaries of the newly reestablished Bulgarian state. As a result, the nascent Principality of Bulgaria included present day Northern Bulgaria and the Sofia region. The Great Powers also decided to create an autonomous Bulgarian majority province within the Ottoman Empire, called Eastern Rumelia. This province comprised of the region of Northern Thrace. From this point onward, political life both within the Principality and the province focused on bringing the two together.

How did Unification happen?

On September 6, 1885, the Principality of Bulgaria united with the autonomous Ottoman province of Eastern Rumelia.

A network of secret revolutionary committees in Eastern Rumelia, some disguised as sports clubs, did most of the work preparing the event. Bulgarian ruler knyaz (prince) Alexander I of Battenberg and the Bulgarian government backed the process. In the end activists in Eastern Rumelia took a risk and put the world before a done deed. The Unification of Bulgaria and Eastern Rumelia was officially proclaimed in the city of Plovdiv, capital of Eastern Rumelia and today Bulgaria’s second largest city.

The political situation was delicate and complicated. On the one hand, the Great Powers were incensed that young little Bulgaria dared to unilaterally undo their decision. On the other hand, public opinion almost everywhere was heavily in favor of the Bulgarian cause. Therefore, none of the Great Powers openly opposed the Unification and so at the end of 1886 the Great Powers recognized the unified state of Bulgaria after the signing of a Bulgarian-Ottoman treaty.

After the Unification Day

The celebrations of Bulgaria’s Unification Day traditionally take place in Plovdiv on the night of September 6th.

The Unification was a precursor to something we celebrate a couple of weeks later (on September 22nd) – the de jure Independence of Bulgaria.