For the first time this summer Free Sofia Tour started the Junior Volunteer Program. Three eight-graders from 54th school in Nadezhda neighborhood took part in the 2-week program, but only one – Alexander Rangelov – “graduated” as the first honorary junior guide.

During the training the high-schoolers observed several tours by professional guides and engaged in structured discussions, reflecting on what makes a tour good and keeps the tourists satisfied. In addition, they had to read and learn part of the extensive “Guide for the guide” manual that each new FST candidate has to be familiar with in order to become part of Free Sofia Tour. The manual covers a wide range of topics, facts, and information on the history of Bulgaria, Sofia as well as curios facts, anecdotes and statistics. For the final exam, the junior guides led two 15-minute English-language tours in front of real tourists. 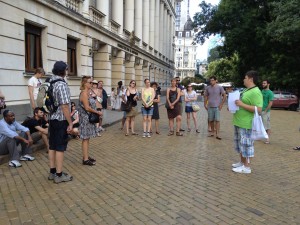 Alex and his group in the City Garden

Here’s what Alexander told us about his experience in Junior Volunteer Program:

It was quite fun. One of the first people I met from the team was Kris. He is one of the founders alongside my English teacher Ms. Zareva. So for the first four days we watched how it’s done and after those four days it was exam time for me and my two friends. So I passed the exam and the following Monday was my first out of three tours together with other guides. The first time I nearly fainted because of worries, however, in the end it all went well and surprisingly for me it was quite good for a first timer. At least that is what Kris and the two other guides told me. The next two tours were not as hard to do but were as important. In the end I finished my internship, I made a cool new friend, I met people from all over the world, I met new people who helped me with my struggles about the tour and other. These may have been only two weeks, however this isn’t the end for me with Free Sofia Tour. Who knows, maybe next year I will be a full time guide – so keep your fingers crossed for me! I will recommend to everyone, even Bulgarians, to come to a tour at least once, because the Free Sofia Tour experience is second to none so “come one, come all”! 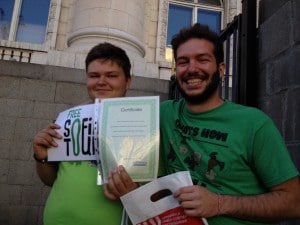 Free Sofia Tour hopes to turn its experimental program into a year-round training program for high school students from Sofia, giving them the chance to develop their English, communication and social skills, as well as the opportunity to interact and make contacts with foreigners – fostering the values of tolerance and inteculturalism.