Hello, dear Free Sofia Tour loyal fans! As time for our spring recruitment and training campaign approaches, we deem it high time we shared how the fall session went and put the two freshest additions to our team, Martin and Nikola, in the spotlight. However, the training wasn’t just for them, it was also for the people on the other side, Radi and Stefan, who did it for the first time as preparation for what is about to happen this spring (as now it’s all their responsibility).

Of course, the training followed the same pattern that was already set up in the spring, for if something works, why change it? First of all, the applicants all met in person with a member of the recruitment team for an interview. Well, an interview is a rather misleading term in this case, because we’re talking about one of those occasions where the ‘interviewer’ talks a lot more than the ‘interviewee’ does, at least in most cases. Unfortunately, at this point our evil Recruitment, Training, Quality Control and Team Spirit (RTQCTS for… well, for short) team had to turn down two enthusiastic youngsters, who had not yet turned eighteen.

Then the training started.

Each applicant had to visit and, more importantly, scrutinize three of our tours, led by three different guides. This time it wasn’t just for their benefit, as we asked them to provide quite detailed feedback for what they saw and heard. You see, we have become experts at making the most of every single situation, but that’s only because we strive to provide the best free tour possible (and, rumors are, we are successful).

After that, we attempted to bore our applicants to death by means of a three-and-a-half-hour-long history lecture, courtesy of historians Deni and Mitko, and amateur geek Stefan. The purpose of this exercise was twofold: to vanquish the mystery in history in the minds of those, who never liked it and probably never will; and to boil down the number of applicants and select the most enduring, who didn’t fall asleep or run away screaming. The survivors were then compensated for this torture with a couple of fun games, aimed at helping the applicants to master the volume of their voices and their diction.

Next up: exam day. It sounds stiff, formal and anxiety-invoking, simply because it is.

To prepare for this, the poor souls had to go through a textbook of 86 pages (just checked, the number is correct!). At this point the applicants produced a mock tour, taking turns at presenting places of interest and leading the group, while the three examiners (Deni, Radi and Stefan) painstakingly jotted down every detail of the guys’ performance. Really, we’re that evil. The exam itself was divided into two parts. During the first part, the examiners were well-behaved and caused no trouble. There was a quick break for brief feedback, and then the second part started, where the three evil people tried to be as unhelpful and distracting as possible, just to test people’s ability to cope with unforeseen circumstances and adapt to uncomfortable situations.

Those who made it through this, progressed to the last hurdle: three tours led by them, under the supervision of three different members of the project. Grades and feedback all over the place again, but two people leaped over this last obstacle, and now they deserve their fair share of limelight.

This is what Martin, or Maro, has to say about his experience:

As someone born and raised in the city of Sofia, who really loves his hometown, I have been interested in the Free Sofia Tour project for a long time. I contacted the Free Sofia Tour members in the summer, met with Kris and attended my first FST meeting. At that time the training for new members of the organization was a question on the table. I got really excited when I was contacted by the Free Sofia Tour team with the news that training for all the people that were interested in joining the crew is about to start. But it was not as easy as it may sound. One could drop out on each phase of the process. Apart from that, there were certain criteria one should fulfill in order to become a member of the team and on top of it – a whole textbook to be learned!

The training program took approximately two and a half months and was full of emotions.

But in the end the important thing that stays with you is the feeling of achievement: you have managed to become a part of such a positive and hardworking team of young people sharing a mission, doing what they love, and by that contributing to the better future of Bulgaria. I can honestly say that it was worth it and now I’m happy to do what I love.

(With special thanks to all the people engaged in the training, who worked really hard and did a fantastic job: thank you Deni, Radi and Stefan and thanks to all of the above mentioned, that made the whole process an unforgettable experience!)

Maro on one of his trial tours

Still not convinced? Well, check out what Nikola has to say, then!

I have been following Free Sofia Tour for quite a while before I actually decided to apply as a volunteer. Little by little I was getting more and more impressed by how dedicated these young people are to this project to a point where I wanted to become one of them myself.

Taking part in the training process for new volunteers for Free Sofia Tour was without a doubt an unforgettable and extremely exciting experience. It is something that got me even more enthusiastic about becoming part of this project. The way that the training was organized made me realize how serious everyone is about it. It was structured, so that it covers all the aspects of being a tour guide. The people involved in this process were really helpful in getting the best out of all the new candidates.

During the training, I got to know that it is not as simple to be a tour guide as it might seem. It got me thinking about the amount of different qualities you need to have to be able to do that and I wanted to prove to myself that I can actually do it.

However, having a really well-organized training is not everything.

What really made my experience so great was actually the friendly environment throughout the entire training process. I didn’t feel any pressure and I could show my abilities without feeling nervous about being marked. When I think about it now, I know that every moment spent on my preparation was worth it and I don’t regret it for a second and this is thanks to everyone from FST who took their time to help me improve my skills.

After passing all the different stages of the training process, I am really happy to say that I am now officially part of the Free Sofia Tour team. It already takes a special place in my life and it is something that gives me a great deal of satisfaction. 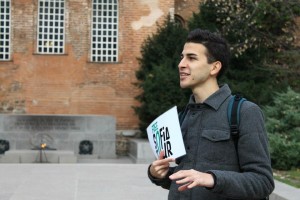 Nikola on one of his trial tours

Okay, now we can rev it up for the big spring training!
Free Sofia Tour