Not minding the Siberian cold, as we call the unusual low temperatures these days in Bulgaria, Free Sofia Tour welcomed its 10 000th guest! On the 7th of February morning tour 11 people braved the arctic freeze (the temperature that morning was actually -10C!) and one of them was the lucky number.

We’ve been waiting for this milestone for quite sometime and we had a special present prepared for the lucky one.

We knew the feeling being outside in this bitter cold (we do it everyday, twice a day), so we had small presents for everyone who was with us on this special occasion – vials of the world famous Bulgarian rose oil and martenitsas. 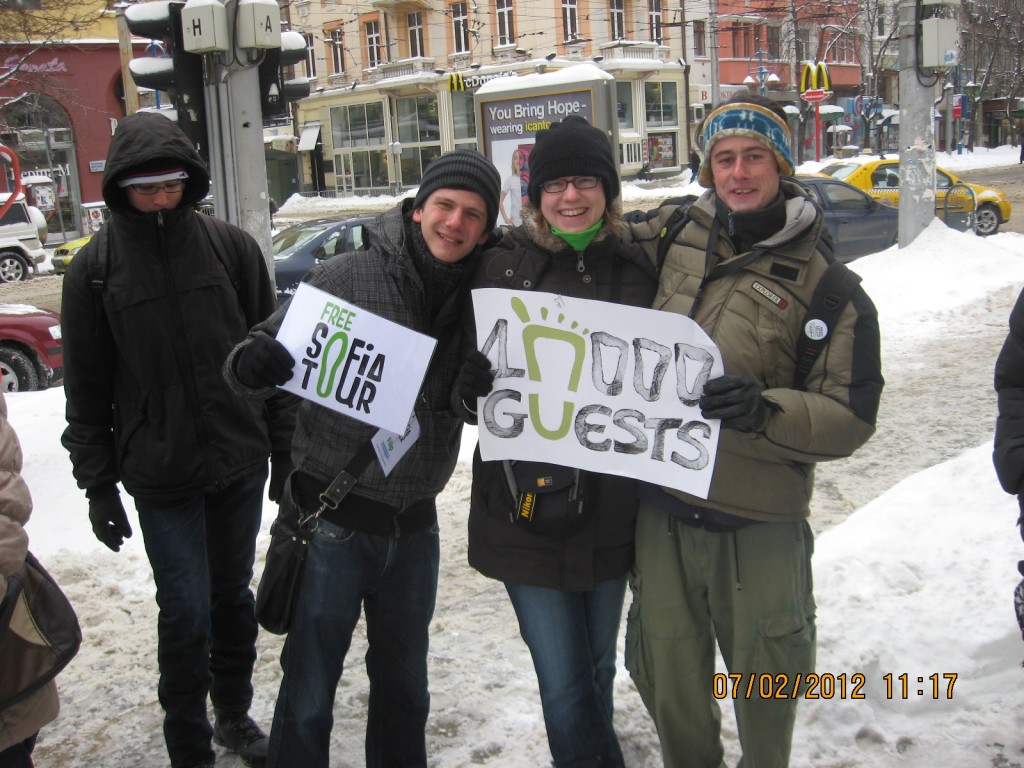 On top of everything we had a high-profile visit that day – the new ambassador of the United Kingdom to Bulgaria. Her Majesty’s Ambassador Jonathan Allen had assumed the post just a week before. He proved his interest in our country even before that – he came in the beginning of 2012 to live with a Bulgarian family and study Bulgarian language. After invitations on Twitter by Boyko and me, he joined the tour. While with us His Excellency even tweeted live updates and uploaded a picture of the lucky 10 000th guest on his Twitter account.

During the winter months (December and January) we welcomed exactly 1030 guests.

We even had tours on Christmas Eve, 31st of December and 1st of January. We’re very happy that all of the reviews were positive and we left a lot of people with smiles on their faces. We appreciate all the feedback given and this is one of my most favourite pieces from TripAdvisor:

“Truly THE BEST thing to do in Sofia!!”
I loved this tour!! The day before I went, I heard people speaking English and it sounded like they were having a lot of fun–I wanted to be with them! So, I found out that it was this tour from freesophiatours, then checked it out on Trip Advisor, and now I will tell you that it sure was fun to be a part of this group! Cross generational, cross cultural, cross socio-economic status, the free tour given by the volunteers is probably the best advocacy program for tourism in Sophia, and probably Bulgaria. Loved it!! I believe it certainly rates the number one rank of things to do in Sophia.

After this milestone, we’re continuing strong. New volunteers have joined Free Sofia Tour and more are yet to come. We also have a lot of surprises planned for later this year. Until then you can get in touch with us on Facebook or TripAdvisor.  See you on the tour!