Fire & shooting near our starting point

My Destination Launches in Bulgaria!

World in logos (part I: The neighbours)

Recently, our small fatherland became preoccupied with the creation of the new brand and logo of Bulgarian tourism, that’s why our friend Andrey from Tourist Sites of Bulgaria & Andrey-andreev.com decided to take a quick peek into the world of logos. He started with our neighbors. Here’s the original post in Bulgarian. We publish the images, videos together with his commentary: 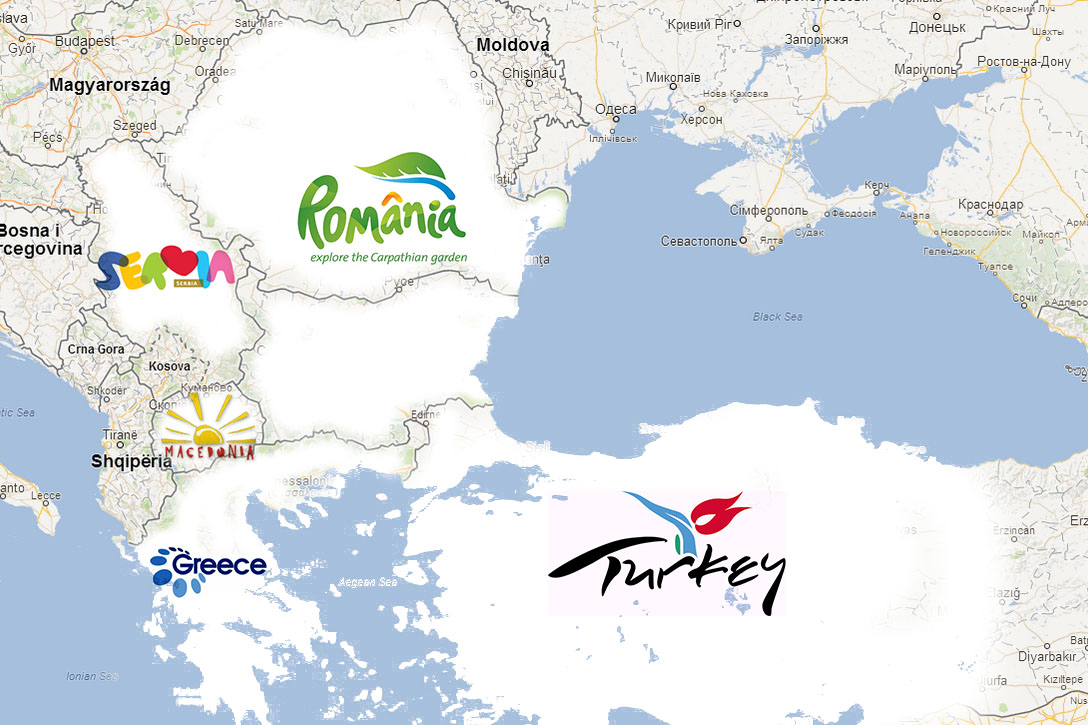 “Since I’m not actually a designer, I will only comment on what I know. The red thingy in the logo symbolizes Turkish tulips. The tulip is the national flower not only of the Dutch, but also of the Turks. After all, it is through Turkey that tulips arrived in Europe in the first place.  I suppose some nations find it hard to imagine a country named after a holiday meal, but at least we, Bulgarians, cannot mistake a bird for a state. The slogan of the Turkish logo is “WELCOMES YOU”, and my personal experience is that one really does feel welcome there. Here you see one of the official commercials…“

“Romania’s green logo was born in 2010, and the slogan clearly advertises their pride – the Carpathian mountains. Well, I’ve never seen them, so it’s time to visit this “garden”. They had their own argument about the fact that the green leaf is actually a stock logo or a graphic element you could buy from every stock site about such shenanigans. However, they have a nice green video. All this greenery has made them part with 900,000 euro. Possibly this left them without any funds for commercials, or at least I couldn’t find any. If anyone has encountered such, please, feel free to share. This is one of the old ones“:

“Their previous logo also put the accent on the Carpathians, but it has more red and a little bit of sea beneath the hills. Here you see a collection of the older Romanian commercials.”

“The Greeks have put the stress on the blue color and the sea. The only interesting thing I discovered on their official site was a link to a gallery at Flickr. Frankly, I expected more from the Greeks, but on the other hand, does their tourism even need advertising? I found no commercials for Greece, if anyone can help, I will be grateful…“

“Here comes Serbia, one of my favorite tourism destinations; well, it is colorful and probably would go wonderfully on a “I love Serbia” T-shirt, I must buy one, but I have only seen the standard white T-shirts with a black “I [heart] Serbia”…  Let’s not forget the slogan „SOULFOOD“. To really understand why I love going there, just take a look at their commercial…“

“Macedonians strictly follow Serbs as far as the themes of commercials are concerned. You decide which one you like better:

The slogan is “TIMELESS”. Macedonians have also produced a logo for themselves, which I had a very hard time discovering…

After calling the audience to help, I also found the new commercials of the Macedonian campaign.

This video is nice and steps to the side of it’s predecessor’s main theme – eating – but there’s a second one from Skopie: