The ancient Greeks used the names Traike (Thraike), Treike (Threike), Trek or Threke to refer to the areas northeast of their own lands on the Balkan Peninsula. The Thracians themselves were originally Indo-European tribes. There are different theories for their origin. Some say that they arrived from the northeast around 1,500 BC and mingled with the existing population in our lands. Others think that the Thracians were always a local people. Herodotus wrote that “[the] Thracians are the second largest ethnos – the first one is India. In different areas the Thracian community is named in various ways. However, the manners and customs of the whole nation are the same everywhere.”

At first, the Thracians existed in separate tribes. They did not form real states until the end of the second and the beginning of the first millennium BC. These small states were also mostly tribal at first. Some tribal leaders gathered more power than others and then handed it down their line. The first Thracian state that unified the majority of Thracian tribes was the Odrysian kingdom, which was established in the early fifth century BC by Teres I. According to Thucydides, the Odrysian Kingdom was the richest country on the Balkan Peninsula during that period.

The best-known remnants of Thracian culture today are the monumental tombs that they built when they buried rich aristocrats. Some estimate that the total number of Thracian tombs in Bulgaria is somewhere between 10,000 and 60,000. These tombs, and the treasures buried in them, not only reveal the wealth of the Thracian aristocracy, but they also help us understand their religious rituals. The Thracians’ funeral rites were directly related to their belief in immortality and the worship of their dead kings and aristocrats. 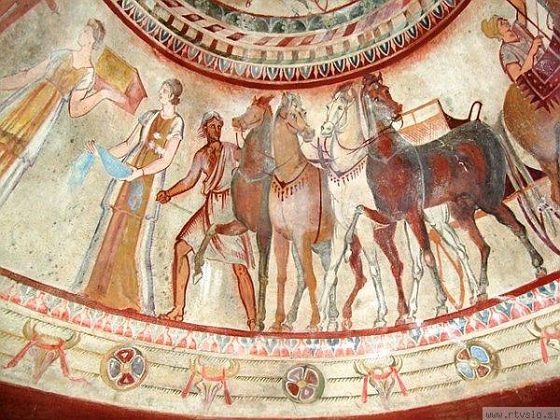 Frescoes in a Thracian tomb, Kazanlak

The Thracians were polytheistic – they had many gods. Some of the deities were universal for all tribes, while others were worshipped only by some tribes. There were so many different beliefs and cults that it is difficult to know today which ones were the most prominent of them all.

Like most ancient civilizations, the Thracians had developed a cult of the powers of nature. They revered sacred forests, trees, springs, and streams. The Thracians also believed in the existence of nymphs, muses, and demons. They believed in the “sacred tree of life,” which was divided into three parts. Its crown symbolizing heaven, its trunk symbolizing the earth, and its roots symbolizing the underworld. Animals played an important part in this symbolism: for instance, the snake was a symbol of underworld forces.

Magical acts and sacrifices were important elements of this cult for the nature. Some reports tell of healing rituals that involved fire and water and fire-dancing games associated with the cult of the sun. Thracian healers used a variety of spells and incantations, accompanied by mysterious magical rituals. Music (musical therapy) was also associated with the mythical harpers Orpheus and Lynn.

Herodotus reported that Thracians worshiped the gods Hermes, Ares, Dionysus, Asclepius and Artemis. However, in Thracian tradition the deities did not have a hierarchical order as they did in the Greek religion. Because of the threefold division of the world (remember the tree of life), the gods were often grouped in triads. Each triad combined different divine functions to express the perfect unity of the world.

One of the most remarkable images in the Thracian mythology is that of Orpheus, which you may have heard about before. The Orpheic religious doctrine combines Chthonic (descent into the underworld) and solar elements, once again symbolizing unity of different parts.

Finally, an important strand of the Thracian beliefs was the cult of the Great Mother Goddess, which was associated with fertility and diversity. She is a protector of plants, animals, nature and people. The Mother Goddess watches over the fertility and the home and protects mothers and virgins.

Because the Thracians buried their aristocrats with their treasures, many artifacts produced in ancient Thrace were discovered by archaeologists in modern times. We have Thracian artifacts and images dating from a large period of time: from XVII century BC to VI century AD. Thracian art shows some typical elements of Eastern and Hellenistic art, but still has its own style.

Some of the most significant treasures found in Bulgaria are the ones from Vulchitran, Panagiurishte, Rogozene, the silver treasure from Borovo, the  Letnitsa treasure and the Dabensko treasure.

The treasure from Vulchitran was found in 1925 near the village Valchitran, district Pleven. It dates back to the late Bronze Age, XVI-XII century BC. 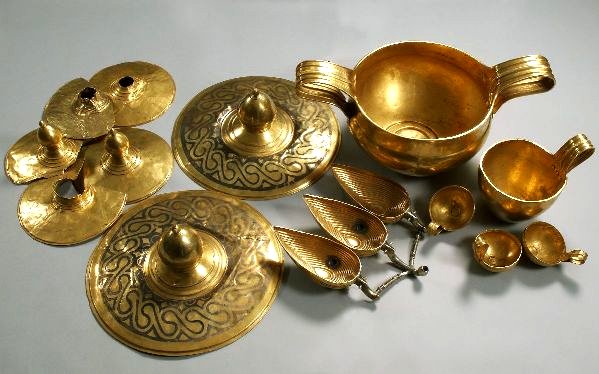 The gold treasure from Panagiurishte is an ancient golden drinking set, which consists of nine gold vessels and weighs over 6 kg.

The Thracian silver treasure from Borovo, near Ruse, dates back to the mid-IV century BC.

The silver treasure from Letnitsa contains some very delicate pieces.

The treasure from Dabensko consists of 15,000 gold pieces. The treasure dates back to 5,000 years BC.

Some other significant treasures found in Bulgaria are those found in the northern part of the Sakar Mountain – 98 gold trim (4500-4000 BC.) ornaments from the Varna necropolis (late V – beginning of the IV millennium BC.), gold artifacts from Dourankoulak (V – VI millennium BC) and necklace Hotnitsa (V century BC.). These treasures are considered to be some of the oldest processed gold treasures in the world.

Orpheus was a Thracian singer and musician, considered to be one of the greatest singers and poets from the antiquity. His story is enveloped with ancient tales and legends. That is why he is considered to be a mythical rather than real character. According to some of the legends, he had an amazing musical talent and a miraculous lyre, with which he was able to tame wild creatures. It is believed that he is the founder of the Orpheic mysteries. Today scientists agree that he was a Thracian king who lived in the iron age.

Res or Rhesus was a legendary Thracian ruler of the Edonois. People who inhabited both sides of the Struma River in the gold-bearing mountains Pangaion (Kushnitsa). Res was thought to be a son of god, but each story gives a different god: different tales listed him as the son of the river god Strymon (Struma River), of the river god Hebrosbank (of the Maritsa River), or of the god of war Ares. According to the legend, he turned into a demon.

And finally, probably the most famous of all Thracians was Spartacus the gladiator, who headed the largest slave revolt against Rome. He was a Thracian from the tribe Medi, which inhabited the middle valley of the river Strymon (Struma).

The Culture of Ancient Thrace

Some of Thracian culture can be pieced together from the writings of the ancient Greek and Roman authors. Also, from numerous archaeological sites and artifacts. But even that is limited. Although we know the most about Thracian burial customs, there are still some disagreements. According to some written evidence, Thracians wept and mourned the dead. According to others, they sent them with joy and glee because of the belief in a happier afterlife.

We do know that the Thracians sacrificed animals during funerals and afterwards feasted on them. They also drank a lot of wine and organized various games and competitions. Sometimes they burned the bodies, but most often they buried them in tombs. In V – III century BC, most tombs were built of stone or brick and covered with large mounds. The walls of some tombs were decorated with reliefs and colorful paintings. The tombs of Alexander and Kazanlak are particularly famous for their magnificent frescoes.

Many Thracian tombs have been looted by treasure hunters both in antiquity and in modern times. Still, some expensive burial gifts from aristocratic funerals have been preserved. Other Thracian treasures were found buried in the ground. Either because they were hidden in times of danger and were never recovered by their owners, or because they were deliberately buried and abandoned as part of unknown to us religious rituals. The famous treasure of Panagyurishte (see above) is an example for the latter. Either way, the treasures we have found during the years can give us an idea of the Thracians’ wealth in this era.

In the V and IV century BC, some of the larger Thracian villages increasingly urbanized. Some of these towns developed because of royal residences, others had primarily commercial functions. But when the Macedonian king Phillip II conquered Southern Thrace in the year 340 BC, he transformed some of these existing bigger settlements into fortified cities. Philipopolis, meaning ”The city of Philip,” was one of these cities. Today, this is the modern Bulgarian town Plovdiv.

In the end of the IV century BC Seuthopolis emerged as the Thracian royal city. Its ruins were accidentally discovered during the construction of the “Koprinka” dam, near Kazanlak. The city was named after the Odryssian king Seuthes III, a contemporary of Alexander the Great and his successors. In an inscription found in Seuthopolis, the city temple and its shrines were described in some length. But the important sanctuaries in ancient Thrace were located outside the settlements in a typical environment – mountain peaks, near springs, in caves, etc. The most famous of these is the sanctuary of Dionysus in the Rhodopes – Perperikon. According to Herodot it was located on the mountain’s highest peak. Today, like Plovdiv and most of the Thracian tombs, you can visit Perperikon to admire some of Bulgaria’s Thracian heritage.