European Night of the Museums Sofia

Mid of March Cátia Bruno entered on a bumpy train ride and got out in a city with lots of stuff to meet and João Dias took the pictures. With a lot of Sirene and Martenitsas. She also visited Free Sofia Tour and wrote an article for the Portugese iOnline media. Read further to find out what experiences she made in our city.

Arriving at Sofia can be a frightful experience. Not for everybody – the one who plays it safe and arrives by plain, lands on an airport like every other, get out to a bunch of yellow taxis yearning for tourists, crosses the suburbs full of neons and tall buildings and goes straight to the beautiful ant touristic city center. But for those who play it adventurous and decide to enter the Bulgarian capital on a train from Serbia, the city waiting for us does not seem the nicest. You cross the border and the landscape is the one of a poor country. Carts in front of houses that lack painting and agricultural lands treated badly. In a blink of an eye, you will be in Sofia, without noticing the difference.

To experience the diversity of Sofia, the Cátia took – of course – a walk around the city with Free Sofia Tour:

It’s like there are two cities living in the same space: on one hand you see the city with the Soviet buildings with no painting or decorations, with people searching for food in the rubbish bin. On the other hand, the city is full of ads from big companies and parked Benz outside the Sheraton Hotel. You have to disconnect from both and explore the city center, by joining the Free Tour – an initiative that by the way exists in every big European city. 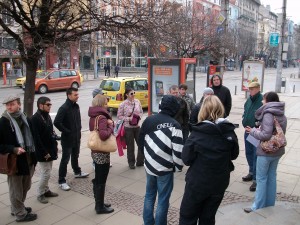 Despite the rather unwelcoming beginning of her journey, in the end she is convinced Bulgaria’s capital has more to offer than you can imagine:

What you see in Sofia is a mixture of monuments that take all breath away: the old Turkish baths, the University with the founders statues by the door, the huge Alexander Nevsky Cathedral, where you can find people from the old lady with a scarf on her head to the young woman with tall boots leaving their candles. On their wrists there’s always a red and white bracelet. Going through the city, you can find trees sprinkled with red and white strings. Martenitsas are the most resistent pagan tradition in whole Bulgaria. They symbolize the coming of Baba Marta (Grandmother March), the unpredictable month. They should always be a gift and they are taken off when you see a stork or a blooming tree, where they can be hanged. The wrists of the Bulgarian people hosting me are full of them. For lunch we have sirene (the typical country’s cheese, similar to feta) in the oven, with honey and walnuts. The starters are like in Turkey, with peppers, garlic, olive oil. All is served with a very light red wine, “the best in here”, they say. I leave the house with some home-made honey.

I went to the Museum of Socialist Arts, hidden in the suburbs, only reachable by subway. It is a small collection, because most of the things that would remind socialism were destroyed, but there is still plenty of Vladimir Ilitch statues on the garden. The wheather is warmer now, good to take plenty of pictures. I still have one day left to go to Sofia’s Opera. The low prices (another Communist heritage) are inviting: 25€ and I am on the best seat watching Donizetti’s ‘L’elisir d’amore’. With English subtitles, of course, because the cyrilic alphabet is a headache for those who do not know it. At the break, the glass of sparkling wine only costs 1€. At the end, a Bulgarian man asks me in English (what an unusual thing!) if I liked it. “Very, very much”, I answer.

Maybe March is not the best season to visit Sofia. But Cátia felt lucky to catch part of our departing winter as well as part of our early spring:

On the ridiculously cheap taxi on my way to the airport, to come back to Portugal, I notice that I don’t take any Martenitsa with me. But it’s not necessary, I figure – the spring has already arrived at Sofia.

Have a look at the whole article (in Portugese) – with pictures 🙂 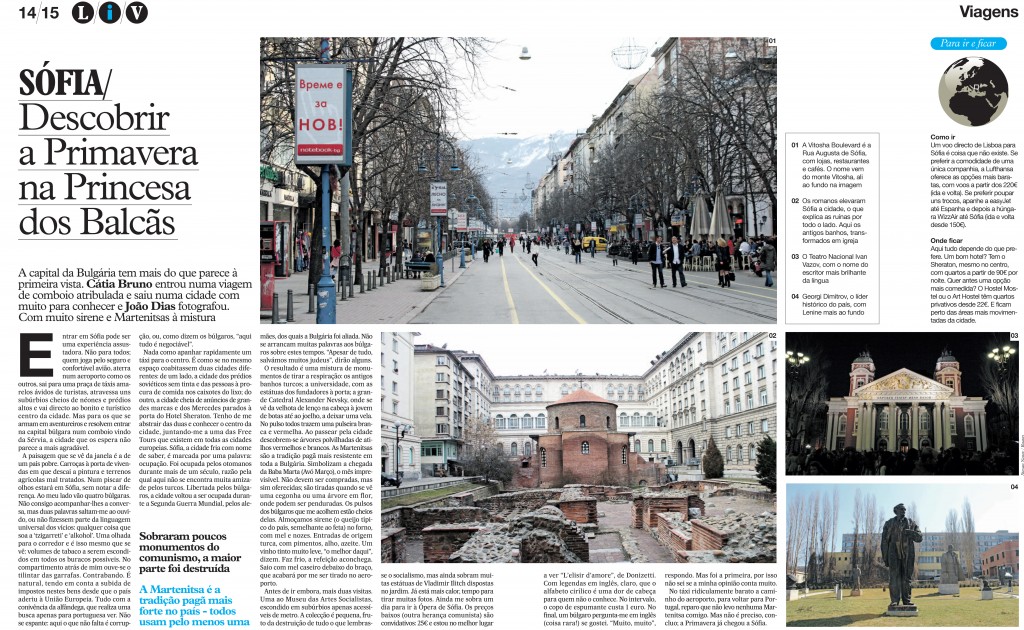