Free Sofia Tour Gets (you) Together on Wednesday, April 9th

After the Christmas workshop we did with the children in Doganovo, now it was time to get ready for one of our favorite Bulgarian traditions – Baba Marta (Grandma March). So, on Saturday, 15 February, we went to Doganovo to make lots of pretty martenitsas. These red and white thread adornments in the shape of a bracelet, doll or amulet that people in Bulgaria give to each other on the first day of March.

More about the tradition

On the first day of March and for a few days afterwards, Bulgarians exchange and wear these white and red adornments. The most traditional form is a set of small dolls called Pizho and Penda.

In Bulgarian folklore, the name Baba Marta (Grandma March) refers to a grumpy old lady whose mood swings rapidly. It is a personification of the month of March. The common belief is that by wearing the red and white colors of the martenitsa people ask Baba Marta for mercy. They hope that it will make winter pass faster and bring spring.

Martenitsas are usually worn pinned to the clothes, near the collar, or tied around the wrist. The tradition calls for wearing the martenitsa until the person sees a stork or a blooming tree. The stork is considered a forerunner of the spring and serves as evidence that Baba Marta is in a good mood and is about to retire. A martenitsa is tied to a blossoming tree as a symbol of the approaching spring. Find out more about Martenitsas here.

So, stocked up with lots of white and red yarn and a variety of beads and ornaments, we headed from Sofia to Doganovo. It was a beautiful sunny winter day and we were very excited to spend it with our friends there! 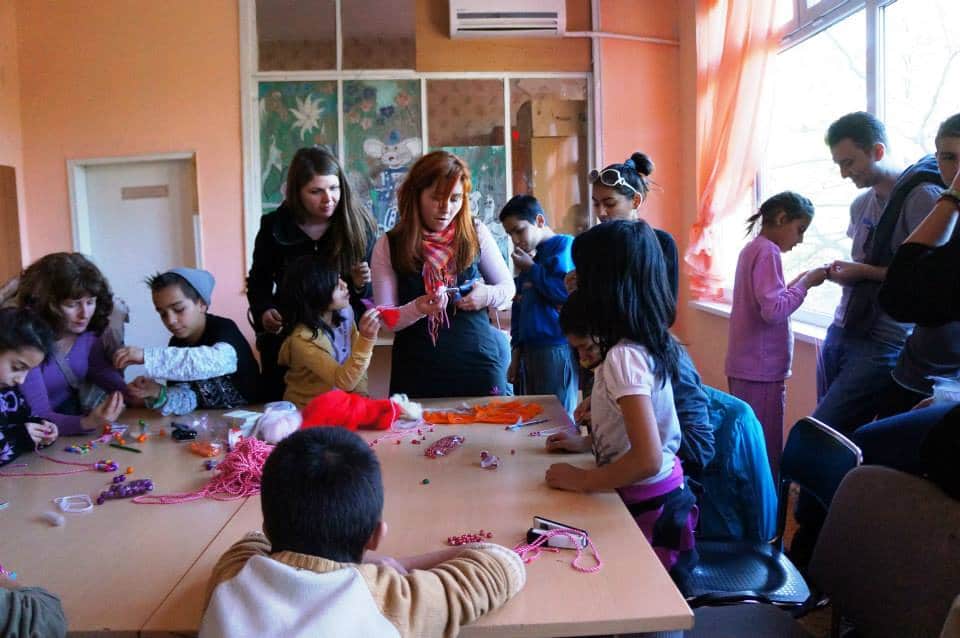 Luckily for us, one of our team members, Snezhi is an expert in martenitsa making. She gave the children many ideas about what to make and how to do it. Surprisingly, however, the children themselves had many creative ideas and came up with gorgeous artsy pieces of martenitsa. Some bracelets, some necklesses, some clothes decorating pieces; some small and others – larger.

And as you can see in the photo below, teamwork was at the max! One person holding the yarn at one end, another holding the yarn at the other end twisting and swirling the thread. Many times, one person was helping to make two martenitsas simulaneously while holding yarn in both hands. Yes, we all have some real skills 🙂

After an afternoon of hard work, the end result was lots of martenitsas made…and…

The next workshop with the kids will be in April. We’ll keep you posted 🙂